Until 1918 the extensive palatial complex at the heart of Vienna was the political centre of the monarchy. Today it fulfils the same role for the democratic Republic of Austria.

The rooms where once Emperor Joseph II drew up his revolutionary programme of reforms, where the Congress of Vienna met and danced and where Emperor Franz Joseph held audiences, now house the offices of the Federal President, the ministers of the chancellor's office and the secretaries of state.

In the Silver Collection magnificent dining services, centrepieces measuring up to 30 metres in length and exquisite napery give an impression of the lavish pomp of imperial banquets.

The Sisi Museum conveys a complex piture of Empress Elisabeth with numerous, partly very personal objects on display which afford fascinating insights into the official and private worlds of this unique woman. Here as in no other place the legend of Sisi becomes tangible, with this imaginatively designed display shedding light in the mystery surrounding the personality of this fascinating woman.

Visitors to the Imperial Apartments will gain an insight into the world of Austria's most illustrious imperial couple. The 24 rooms in the apartments occupied by Emperor Franz Joseph and his wife Elisabeth, comprising studies, residential suites and reception rooms, are all furnished and decorated to the highest standards of historical authenticity, and in their comparative restraint form a fascinating contrast to the exuberant splendor of imperial summer residence at Schönbrunn. 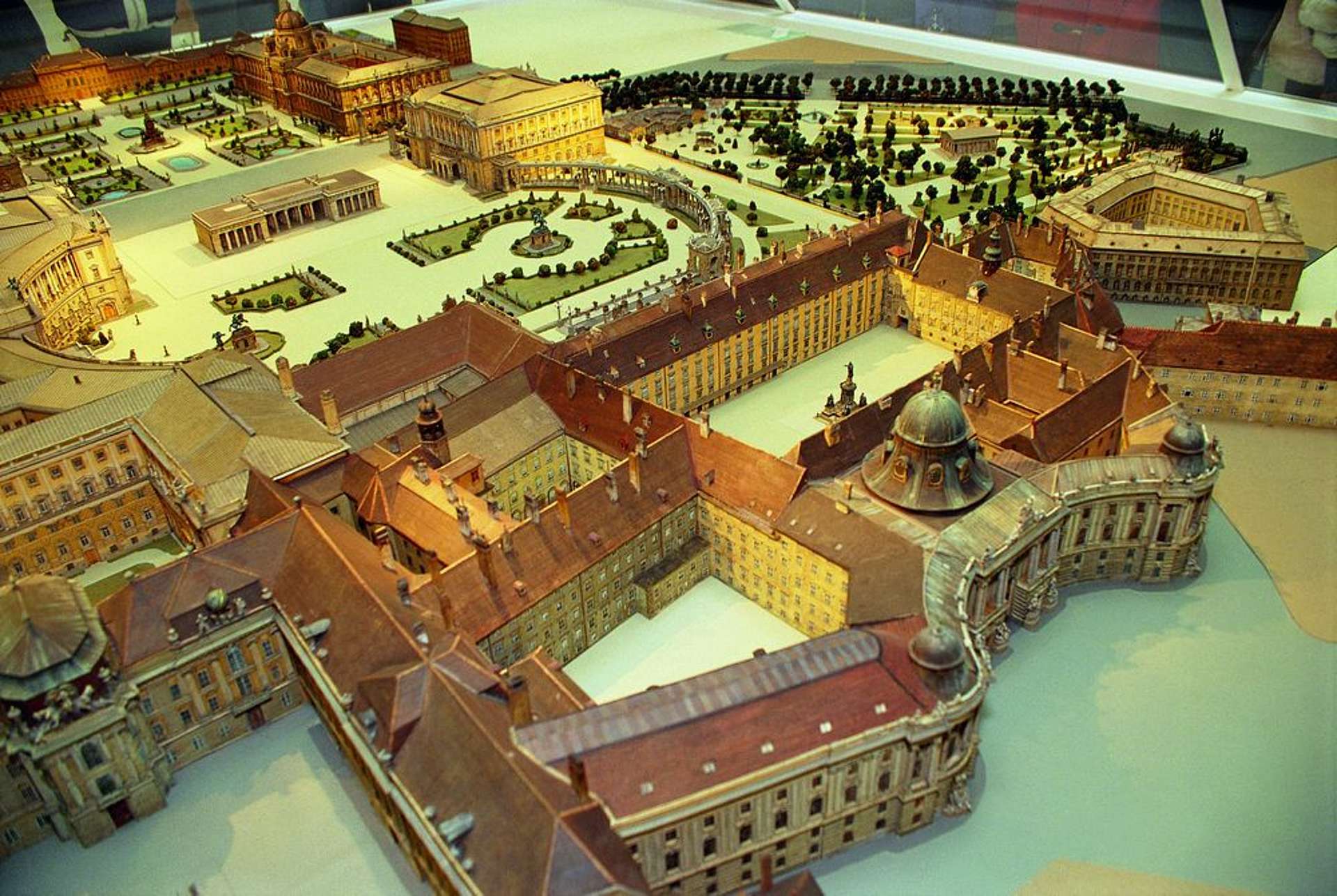 Model of the Hofburg

For over 600 years the Vienna Hofburg was the residence of the Austrian sovereigns. Over the course of the centuries it developed into one of the most important centres of European history.

It was from here that the Habsburgs reigned from the 13th century, at first as rulers of the Austrian patrimonial lands, from 1452 as emperors of the Holy Roman Empire, and finally as emperors of Austria from 1806 until the end of the monarchy in 1918.

Originally a medieval fortified castle dating from the 13th century, the Hofburg was extended by each emperor. The sprawling, asymmetric complex which extends over 240,000 m² consists of 18 wings, 19 courtyards and 2,600 rooms in which nearly 5,000 people still work and live today. 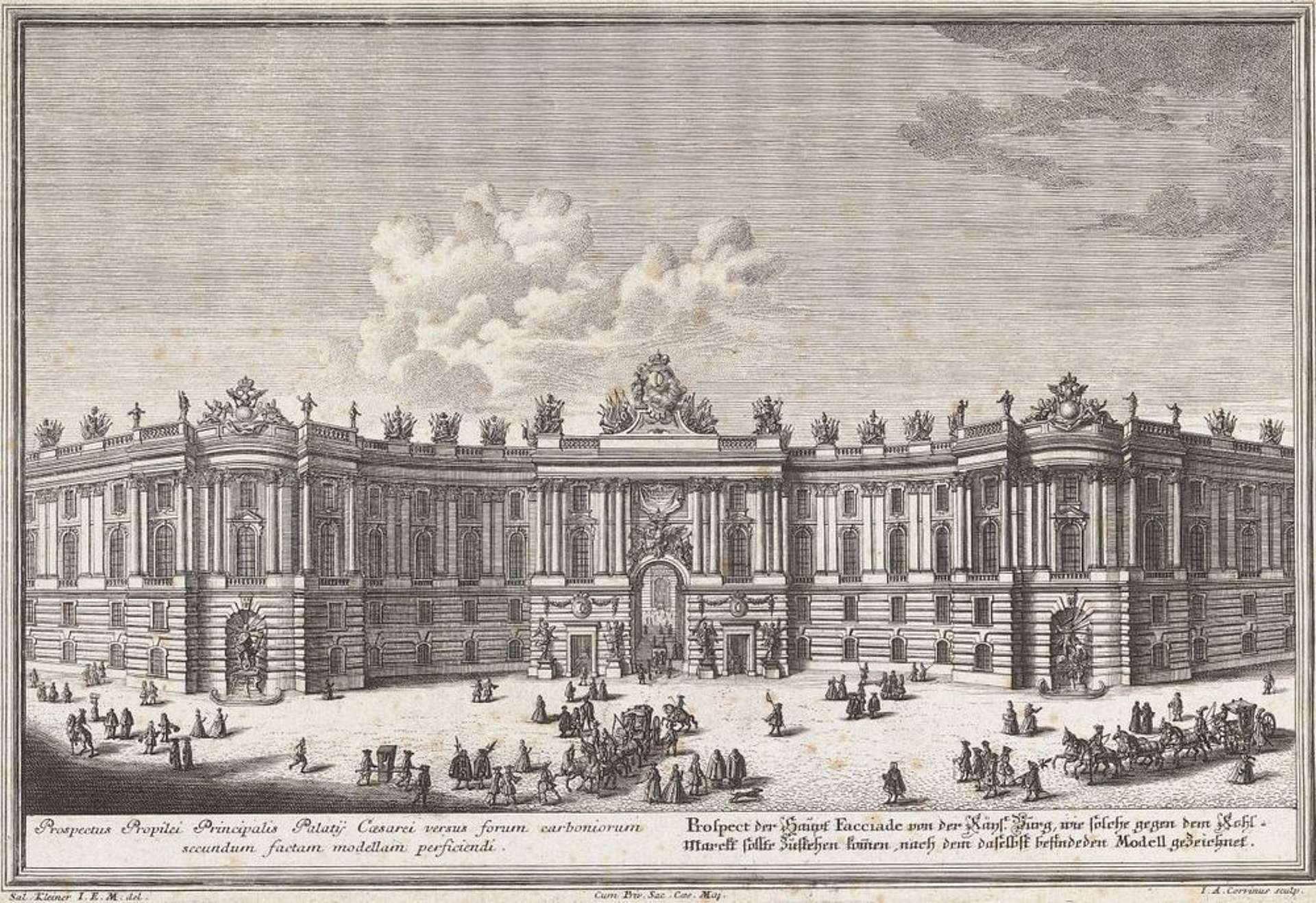 The oldest part of the Hofburg is the Alte Burg (Old Fortress), which since the 18th century has been called the Schweizertrakt (Swiss Wing) after the Swiss Guards who served as the palace watch. The core of the medieval fortress complex has been preserved, although its four corner towers, most of the moat and the drawbridge had to make way for the alterations that the palace underwent over the centuries. In the middle of the 16th century the façade was renewed in the Renaissance style.

In 1552 the Schweizertor (Swiss Gate) was built. Designed by Pietro Ferabosco, it is one of only a handful of Renaissance monuments in Vienna. This wing houses the Imperial Treasury, where the regalia of the Holy Roman Empire and the Austrian Empire are kept. The Vienna Boys' Choir still sings on Sundays at High Mass in the Burgkapelle (Palace Chapel) which was built in 1449.

In 1559 work started on the Stallburg as a new residence. Since the 18th century this part of the palace has contained the stables of the famous Lipizzan stallions which can be seen daily (except on Mondays) at their morning training or their performances in the Winter Riding School, situated on the opposite side of the street.

The Amalienburg (Amalia Residence) was erected as a free-standing building opposite the Schweizertrakt during the 16th century. It is named after Empress Wilhelmine Amalia, who used it as her dower residence after the death of husband, Emperor Joseph I. The last occupant of this part of the Hofburg was Empress Elisabeth, whose apartments are today open to the public.

In the 17th century Emperor Leopold I had the Swiss Wing connected to the Amalia Residence. This early Baroque connecting wing was built between 1668 and 1680 and named the Leopoldinischer Trakt (Leopoldine Wing) after him. It was occupied by Empress Maria Theresa during the 18th century, and after her death its magnificent apartments were used until the end of the monarchy as state rooms. From 1946 it has housed the office of the Austrian Federal President.

In the deep basement of one part of the Hofburg the imperial wine cellar was housed on three floors. The remaining holdings of wine were auctioned off at the end of the monarchy and the space used for a depository of plaster models of the fountains and monuments on the Ring.

During the 18th century the Hofburg was enlarged with several magnificent Baroque extensions, all designed and begun by the court architect, Johann Bernhard Fischer von Erlach. Following the architect's death in 1723, his son Joseph Emanuel Fischer von Erlach supervised the construction work.

Between 1723 and 1735 the Court Library, now the Austrian National Library, was built to house the precious collection of books owned by the Habsburgs. The Great Hall with its harmonious Baroque interior is one of the most beautiful of its kind in the world.

On the death of Johann Bernhard Fischer von Erlach, another architect, Lukas von Hildebrandt, saw his chance had arrived. While Fischer's son was engaged in realising his father's designs, Hildebrandt started planning the Imperial Chancellery Wingwhich initially housed the chancellery of the Holy Roman Empire. However, at the emperor's express wish Joseph Emanuel Fischer von Erlach was commissioned with completing this wing in 1730. Following the dissolution of the Holy Roman Empire in 1806, the chancellery was converted into residential suites for the imperial family. From the middle of the 19th century they were occupied by Emperor Franz Joseph.

The sculptures on the portals are by Lorenzo Mattielli and represent the Labours of Hercules. The central section contains the Kaisertor (Emperor's Gate) which gives access to the imperial apartments. From the edge of the roof rises the imposing armorial shield of Emperor Charles VI with the double eagle bearing the Austrian shield in the colours of red, white and red, surmounted by the imperial crown.

In 1735 Johann Emanuel Fischer von Erlach completed the Winter Riding School, today still the setting for the performances of the Spanish Riding School. The Redoutensäle (ball rooms) were then erected as an adjoining building. Originally used for grand receptions, balls and other festivities, they today serve as a congress centre.

At the beginning of the 19th century Ludwig Montoyer built the magnificent Hall of Ceremonies which was from then on used for all the ceremonial events of the imperial dynasty and which is still used today for many of the famous Viennese balls. 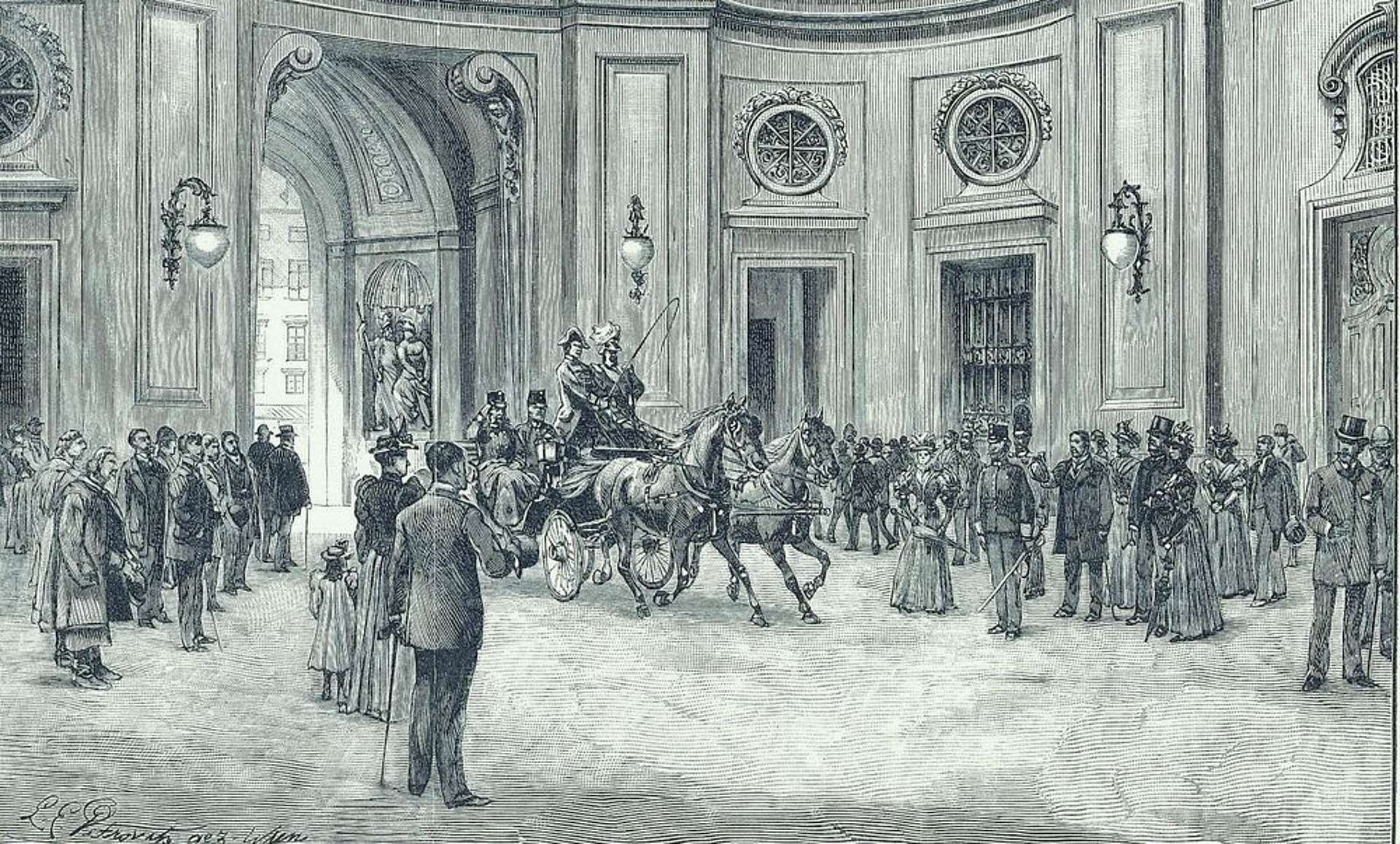 It was not until the end of the 19th century when the old palace theatre was demolished that Ferdinand Kirschner completed the Michaelertrakt (St Michael Wing, named after the church it faces) to Fischer von Erlach's designs. With its curving façade and its 50 meter high dome, it dominates the façade of the palace which faces the centre of the city.

At the beginning of the 20th century, shortly before the end of the monarchy, the New Hofburg was erected facing Heldenplatz. With the sweeping curve of its impressive monumental facade, it was originally planned as part of a much larger 'imperial forum' designed by Gottfried Semper and Karl Hasenauer. Today it today houses a part of the National Library as well as a number of collections and museums.